In The Communist Manifesto (1848), Karl Marx and Friedrich Engels noted:

Abolition of the family! Even the most radical flare up at this infamous proposal of the Communists.

While this infamous communist position is given up or revised by supposedly left parties, the communist transformation of society will involve the abolition of the family and the bourgeois-nuclear form that it takes today. What does this mean?

The family, a core institution in class society associated which tries to englobe sexual reproduction, is a hotbed for all kinds of indoctrination, repression, violence, and abuse, hosting every backward phenomenon you can imagine. But it also accomplishes some necessary useful social functions, which will be taken up by other institutions in the transition to socialism. The family is a necessity in class society based on economic and social oppression which incentives people to marry, the economic dependence of children on parents, and the lack of social institutions which can replace it.

Today, the main backwards role the family plays is the oppression of children, who are subjected to a tyranny of the parents and denied the basic rights which should belong to every human, most importantly the right of free development of the personality. The family is responsible for producing authoritarian, obedient, repressed humans who are afraid to step out of the norm. By setting parents against their children, furthermore, the family divides the working class, similarly to sexism and racism.

In fact, even the barbarous extreme of domestic violence against children (including “corporal punishment”) is allowed in the vast majority of the capitalist world, being legal in 90% of countries (Human Rights Watch, 2014). This means parents can beat up children (which can mean up to 18 years old!) for actions which usually consist of things like reading a book they don’t like.

But why would parents do such a thing? In this alienated capitalist society, authoritarian structures are reproduced by giving the oppressed some power. The workers suffer the extreme oppression of capitalism, but they are bribed by being allowed to oppress their children which makes them feel powerful. In the authoritarian capitalist hierarchy, those with a low status are allowed to shit on someone who is even lower, and by taking up this power do not rebel against those who are above them. And under current conditions, it works — with a tremendous decline of the class consciousness of the working class, workers are easily swayed by such tricks.

The nuclear family is a parents’ tyranny where in the majority of cases children have to obey parents’ every illogical obsession and whim. The major examples would be children being punished for being communists, atheists or gay; but in fact these are only highlights, and everything the children might want to do which is not in line with what the parents think is up to being repressed. Children are constantly abused and traumatized, with their free development of their own personality being almost totally impossible. Parents effectively have unlimited power, often doing cruel things such as preventing children from talking to certain friends, or reading certain things. The child’s daily life is wading through an endless amount of illogical and harmful restrictions.

The parents’ oppression in capitalism is based on economic power, the children economically depending on them and being unable to survive without it. Thus, communism has the perfect solution for this issue.

Of course children need to be protected from dangers, of course children are not equivalent in capacity to adults. But capitalist society’s age discrimination means that, in the case that a child says 2+2=4 and an adult says 2+2=5, the adult is taken as if they were right. Communism means the abolition of this useless distinction. The guarantee of protection of children will be taken away from the backwards bourgeois family and assigned to new, progressive social institutions.

While there is no socialist blueprint, one prediction could be that in the earliest stages of the communist transformation of society, society will make severe inroads on the parents’ tyranny, at first affecting the worst parents only; for example, criminalizing any sort of domestic violence on children. From a young age children will be given the choice to leave the family home and live in social homes, or on their own, with their food and home being guaranteed for free. In communism, children will be allowed to do anything which does not harm themselves or others; and they will be free to do more risky things from a much younger age than they are now, as soon as they demonstrate they have the rational capacity to take decisions. No arbitrary restrictions, indoctrination nor censorship would take place. Plus, in communism, children must be guaranteed the highest quality of life in spite of parents’ wishes: for example, children will be vaccinated in spite of irrational, anti-medicine, anti-science parents’ decision, unless the children demonstrate rational decision capacity and choose not to be vaccinated. Communism also means the abolition of the social recognition of marriage, leaving it as an entirely private ritual for those who wish to partake on it.

Furthermore, in communist society children will be given the freedom to work from a young age. While ostensibly left parties have falsified or given up Karl Marx’s unmistakable position on this issue – a clear indicator of how far these parties are from actual communism – we defend children’s ability to work in good and safe conditions. Apart from what was said previously, this would be the other key step which would eliminate the nuclear family oppression based on economic power. Importantly, we also defend children’s freedom to work in capitalism. In fact, in Bolivia child workers have their own union (UNATSBO; Union of Child and Adolescent Workers), which led the successful campaign that lowered the working age to 10 — with many children who are illegally working at an even younger age wanting it lowered even further, saying the current criminalization rather than regulation allows capitalists to abuse them. 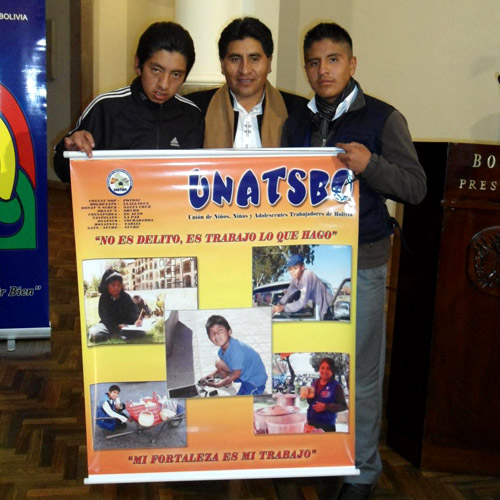 UNATSBO poster says: “It’s not a crime, what I do actually is work! – Work is my strength!”

Criminalizing child labor only hurts children, and makes sure it keeps going on illegally, in worse conditions. What is needed is to guarantee a livelihood and high quality of life to everyone, so that children do not have to work unless they want to, and to force capitalists to offer conditions which are good for workers, especially children. The criminalization of child labor is a capitalist trick akin to many of its measures which makes it look like capitalism is progressive and humane while in reality doing nothing to help or only harm, and the fact that some supposedly “left” parties support it – in imitation of the capitalist parties – shows just how degenerate these parties are and far from communist principles – or humanist principles in general. As communists, we defend the communist and humanist principle that there should be no such thing as a victimless crime.

In conclusion, we say: return to the genuine principles of Marx and Engels! Destroy capitalism and in doing so abolish the family! As Marx stated in his now famous severe criticism of the SPD’s Gotha Programme, which claimed to support socialism but took the wrong positions:

A general prohibition of child labor is incompatible with the existence of large-scale industry and hence an empty, pious wish. Its realization — if it were possible — would be reactionary, since, with a strict regulation of the working time according to the different age groups and other safety measures for the protection of children, an early combination of productive labor with education is one of the most potent means for the transformation of present-day society. (Karl Marx, Critique of the Gotha Programme)